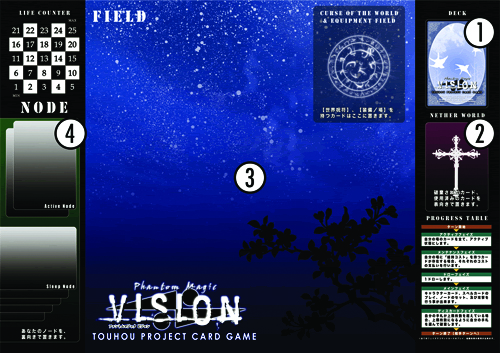 A deck consists of exactly 50 cards. There can only be three copies of a single card throughout the deck.

Before the start of the game, all participating players must shuffle their decks, have other players shuffle or cut their deck, and then place said deck in its appropriate place on their field. All players then set their life counters (dice, stones, etc) to 25. Then players decide who is to go first, whether that be through a game of rock-paper-scissors or the rolling of dice. Once the starting player and order of play is decided, all players draw seven cards from the top of their deck. Officially, it is not possible to "mulligan" one's hand, though in casual play it may be permitted through general consensus.

Object of the Game

If either of these cases come to pass, victory will be achieved:

1. Your opponent' life points drop to 0 2. Your opponent must draw a card from their deck, but there are no cards left (even if the deck runs out of cards, they don't immediately lose)

The flow of the game is divided into phases. Here are the following phases in their respective order: Active, Maintenance, Draw, Main, and Discard. In a given turn, which is defined as a cycle through the five phases, there is an Offensive and Defensive player. Once the Offensive player has completed the five phases, the roles of the two players switch and a new turn begins.

In this phase, all cards which are considered in "sleep mode" are set to "active mode". Nodes are not included in this process, however.

This phase is essentially where most actions will be performed. During the main phase, the Offensive player may initiate an attack, play a character, or play a spell card.

This phase concludes the cycle of phases composing a turn. At this point, if the Offensive player has more than seven cards in their hand, they must discard cards until they have seven. Upon completion of this phase, combat damage dealt to characters is reset and effects lasting until "end of turn" are ended.

Method of Playing a Card

To play a card, one must go through the following steps:

Essentially, the "Node Requirement" refers only to the number of Nodes that must be in your Node Area - the "Cost" is what specify how many Nodes you actually have to use.

If this card is successfully placed onto the field, if it has effects that state "When this card comes into play...", those effects now take place.

There are two states, or "modes", of a card: active and sleeping. In general, cards in the sleeping mode cannot perform most typical actions. For instance, characters first come into play in the sleep mode, meaning they cannot attack or defend until they are later made active during that player's next Active Phase.

Typically, the characters will deal damage to each other simultaneously. Each character subtracts the opposing character's power from their own toughness. If at this point a character's toughness is equal to or less than 0, that character is then destroyed and placed in the appropriate player's Netherworld. The act of attacking or blocking will then set that character to sleep mode.

Note that the damage dealt to characters persists until the conclusion of that turn's Discard Phase.

When a Defensive player is attacked by a character and does not block, they may choose to "Graze". To Graze, the Defensive player takes the Graze value of the attacking character, takes that many cards off the top of their deck, and adds them to their sleeping nodes. This is a great desperate tactic for the Defensive player when they need more nodes for a counter-assault or to build up momentum.

Performing an interference is done by playing a card during an opponent's turn to hinder or cancel an action they are taking. This is traditionally done through the use of Command cards, as they can be used at any time, but there are abilities that exist that can act as interrupts. If you and your opponent respond to eachother's interrupts, then each card ability resolves in the order from the last card played to the first card played. Consider this example:

If Player 1 chose not to respond to Player 2's damaging ability, their Rumia would have been destroyed. However, because Player 1 interrupted and gave Rumia +1/+1, she survives through this ordeal.

Abilities are essentially effects of a card that can be used to perform an action. Abilities are labeled to identify when and how they can be used. There are two kinds of abilities: Automatic and Cost.

Automatic Abilities are effects that take place when certain conditions are met. There are three different kinds of automatic effects: Auto-α, Auto-β, Auto-γ. Auto-α abilities exist as long as that card exists on the field. Auto-β's are abilities that exist in areas outside of the normal playing field, such as one's hand and one's Netherworld. Auto-γ's take place at a very specific point, such as "At the beginning of the Maintenance Phase" or "When a character goes to the Netherworld.

Cost Abilities require that some sort of payment take place before they can be executed. There are two of them: (X) and (S). (X) costs can be anything from a simple node cost, to life points, to discarded cards. (S) costs consist of setting the card with the ability to sleep mode.

Abilities are generally labeled with when they can be played. There are three times in which these abilities can be played: Always, Opponent's Turn, and Your Turn. These terms are fairly self-explanatory, and are found alongside the costs of abilities.

Keywords are abilities that characters have that are condensed to a few words for the sake of uniformity and convenience. They are listed below:

Stealth: (Auto-γ) When this character attacks, it cannot be blocked unless by another character with the same race.

Resistance A: (Auto-α) This character cannot be dealt damage by characters of the race 'A'.

Mana Charge X: (Your Turn)(S) Take X cards from the top of your deck and add them to your sleeping node pile.

Retrieved from "https://touhou.fandom.com/wiki/VISION_Phantom_Magic:_Gameplay?oldid=139918"
Community content is available under CC-BY-SA unless otherwise noted.