Characters compose the main, driving force of a player's deck. Characters are capable of attacking and blocking in addition to their abilities. A character card is labeled with all of their attributes that will affect their performance throughout the game. 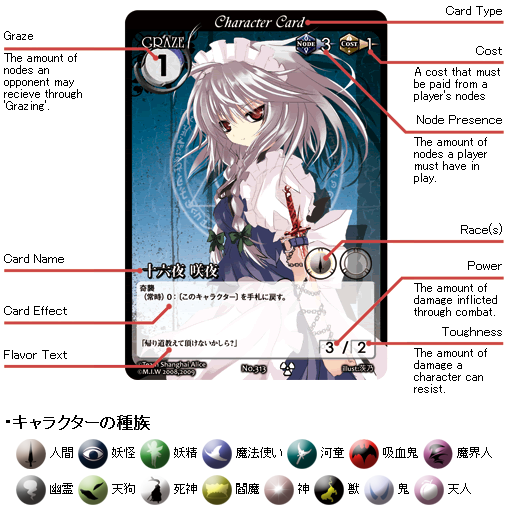 One of the more critical attributes for characters are their power and toughness. These values are located at the bottom-right of the character card and are separated by a forward slash.

As you must use resources to play characters, their costs are also significantly important. There are two basic conditions that must be met in order to play a character, one being meeting the character's node requirement and the other being paying the cost for that character. These two values are located in the top-right of the character card. The "Node" value denotes the node requirement, or how many nodes you must have under your control, for the character card. The "Cost" value denotes the actual node cost that must be paid to play this character. See VISION Phantom Magic: Nodes for more information on this process.

The next value is the character's "Graze" value. If this character deals damage to an opponent, the opponent can choose to add that many cards from the top of their deck to their sleeping nodes pile. This value is located in the top-left of the character card and is labeled as "Graze".

Retrieved from "https://touhou.fandom.com/wiki/VISION_Phantom_Magic:_Character_Cards?oldid=139170"
Community content is available under CC-BY-SA unless otherwise noted.