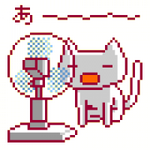 Well, since you like Sakuya one better, I reckon a greyish-light-blue background with black text would look nice. Links could be a darker blue so that it's noticeable (probably something like azure). As for boxes, (such as the 'contents' box and the 'Recent Wiki Activity' box) can be a slightly darker greyish-blue. Hope this gives you an idea. Thanks for your time! --Okuu 03:05, December 29, 2011 (UTC)

Hey Ima, I was editing somethings at the portuguese wiki and was wondering how to use the "Hidetext" template there, I don't think it has one. Alanomega 20:13, December 29, 2011 (UTC)

I was just curious about how many/what kind of things do you allow in the arranges/remixes section of a characters themes? That may sound a little vague, so here's an example.

In Keine's remixes/arranges there's a Plain Asia arrange by Dark PHOENiX, Eternal Nocturne, and the list goes on. How many arranges/remixes would you allow per character/theme? If I were to find one by Silver Forest (which isn't on the list on Keine's page of arranges/remixes) would I be able to add it, or no? Is there some sort of guideline to what can be added to the arrange/remixes section? Just curious~

Hello again. I was rummaging through some articles and noticed that there are categories for certain circles and whatnot. Dark PHOENiX however, did not have its own category. Should one be created for the group, or is there a specific reason they don't have one? Thanks in advance~

In addition, I don't suppose we'd consider Night Sakura of Dead Spirits Yuyuko's theme, huh? As it stands, no one owns the theme. Would the wiki allow one to add the song to Yuyuko's page, as well as remixes/vocals? I would completely understand if not, as per usual, I'm just kinda curious. Thanks for your time again ;^^

I Wish That I Could LiveWith Nothing But The Night

I don't know if you are aware about the Trans-Pacific Partnership, but the toxic trade treaty was just signed yesterday. However, it has not been ratified. If ratified, Wikia would be forced to take down any copyrighted content, including those in public domain. Do you think we should add this to the front page and change the color scheme accordingly in protest?

The Trans-Pacific Partnership was signed in February 2016 but not ratified. The full web version of Touhou Project Wiki has blacked out in protest of this oppressive "free trade" agreement that will censor the Internet. Please join us and spread the word about this threat. Thank you in advance for your understanding.

The Touhou Project Wiki has been nominated for inclusion in our gaming footers by a user. We're considering creating a brand new footer solely for shoot 'em ups, but are waiting for a minimum amount of sites to agree to placement. Please let me know if you are interested!

Retrieved from "https://touhou.fandom.com/wiki/User_talk:Imanie?oldid=181316"
Community content is available under CC-BY-SA unless otherwise noted.