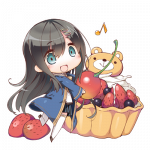 Somewhere in the Forest of Magic

Basically I'm being checking this wiki for 12 months already... And there are a lot of things to update it... (I don't want to be a show-off -_-)

To those who are interested to my novel project please use the talk page.

What i add here(in this wiki)?

Basically I won't lie, because truth in details is what I do -Aya

1.Iku Nagae(Edited by someone) 2.Rin Kaenbyou (Edited by Someone) 3.Hell of Blazing Fires (Update by someone) 4.Yamame Kurodani (Fixed the Grammar by MaidFairy) 5.Added the Palace of the Earth Spirits 6.Added Hakurouken and Roukanken 7.Added Palanquin Ship,Jeweled Pagoda of Vaisravana, Seed of Non-identification, Keystone(pictures from true blue) and some major adds. 8.Touhou Hisoutensoku: Player System cards 9.Byakuren Hijiri 10. Added the Geyser Underground Center 11. Added the Bamboo Forest of the Lost 12. Hatate Himekaidou (Edited by Someone) 13. Added the stage 4,5 and 6 script of the all heroines in Ten Desires (Sanae not included) 15. Added information on Mononobe no Futo 16. Add the Hermit. 17. Added the Ten Desires: Extra Story

Retrieved from "https://touhou.fandom.com/wiki/User:Dandan550?oldid=158575"
Community content is available under CC-BY-SA unless otherwise noted.