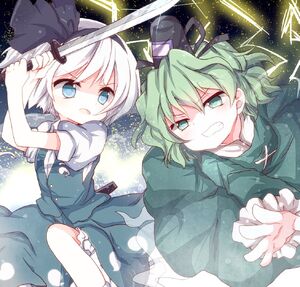 She's reaaaally cute, DAT HEADBAND, I love her epic use of swords, I love the fact that she has a ghost next to her, and her clothes are mainly green, my favourite colour :3 I consider her my 'more than a waifu'. I will never forget how cute she looked in Touhoumon.

NUClEAR FUSION~ I realised Utsuho's colours are the colours of the Irish flag (WHAT THE). See, I did a project on Ireland a while ago...
Well, I consider her my 'not more than a waifu, but more than waifu... what does that mean? O_O'

I knew this day would come. Because I roleplay as her, she means a darn hell lot to me. <3

Since I started playing Hisoutensoku more often, I realised how much I love Patchouli. She brought me to... success. Not that any of you would understand.

Somethign about me and cheese.

The Gloomy Power of Love interests me.

My so-called mother. Ever since her appearance on Touhoumon, my view on her completely changed.

MIIIIIIMAAAA~ I won't forget how much you helped me out on Touhoumon!!!

She's a DJ, Saint, Shemale and a True Administrator.

If you count fanmade themes, I love Momiji's "Awakening Wolf Instincts". It's so amazing. But since that's fanmade...

It's so epic and shows how strong Yukari really is. I don't care if it's still another arrangement of Necro-Fantasy—I love it and it still conveys some sort of beauty. If music CD's count, I think the Magical Astronomy version is better.

At first you think "wtf is this doing here". Too bad, she's an early boss so you defeat her before the good part of the theme starts. That second chorus itself beats the whole lot of Necrofantasia, to be honest. However, for the rest of the piece, it can't go above Necrofantasia.

The original version of Necrofantasia, it has a similar melody except in different instruments. It's a powerful and beautiful extra stage song.

By far, the best PC-98 song ever. It expresses Kana's sad backstory and it just really is beautiful.

5 Onigashima in the Fairyland ~ Missing Power

It's powerful. It's beautiful. It's strong. And at the same time, it's joyous and light.

3. The Capital City of Flowers in the Sky

IT'S SO CALMING, IT'S JUST SO BEAUTIFUL... and fast XD

That piano just sounds.. so clean

5. The Primal Scene of Japan the Girl Saw

My favourite song ever is Border of Death by IOSYS. However, I don't know about the rest. Dark PHOENiX is my favourite circle, so here are my top ten :3

SYNC.ART'S is my second favourite circle. :3