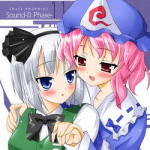 ChocolateLily's not-so-perfect memento in not-so-strict sense can be found here.

Based on fanmade characters.

~Welcome to my User Page~

Didn't see ya there! I'm ChocolateLily, and I'm a HUGE jerk :D [1] I like Youmu Konpaku and I love Touhou<3
EVERYTHING YOU SEE HERE IS FANON AND NOTHING IS OFFICIAL.

My top 10 fanmades. It took me ages to decide this and take a final confirmation.

Special characters that I didn't make, so I'll post them here.

Emiko Samidare was made by "unidentified".

Manipulation of Anything Scientific (especially rain)

"Bob" lived outside Gensokyo with her parents, who were very forceful and often embarrassed Bob. Her parents wanted Bob to live on her parents' legacy; however Bob didn't want to be a hippie. She was more interested in science; however her parents were very unsatisfied. Bob's family was all goody-goody and eventually, Bob couldn't endure any more of this crap.

She was often teased for having the name 'Bob', which was more of a masculine name and Bob is female. Bob ran away from her family and run upon a mysterious border. She met a lady named Yukari Yakumo, who found Bob to be suspicious. Bob didn't want that pathetic name anymore, so she told Yukari she was 'Emiko Samidare'. Yukari escorted her into Gensokyo, where Emiko's new life would begin, with new friends and enemies.

Emiko met Rinnosuke Morichika at Kourindou, so Emiko began to live there, eventually becoming intimate with him. In Gensokyo, with no hippie parents to pest her, Emiko focused on her science, eventually becoming so skilled at it, she could manipulate anything scientific. Due to her relationship with Rinnosuke, her ability to manipulate rainy science was magnificent. She worked on a few projects with Rikako Asakura, such as the 'Great Jinzou Rain Project'.

However, Emiko had a bad relationship with Yumemi Okazaki. They always argued over 'who was the best scientist'. Almost daily, they would invade each other's labs and attempt to completely demolish it. Yumemi became very troubled and she had to figure out a surprise attack against Emiko. One day, Yumemi held an organised attack on Kourindou to end Emiko's career once and for all, so that Yumemi could be declared as the best scientist in the world. Emiko obviously retaliated, however, Rinnosuke, fearing the life of his lover, stood in front of one of Yumemi's attacks, piercing his stomach and Rinnosuke bled to death. Emiko faced her defeat and watched Rinnosuke die in her arms. Ever since, Emiko wanted revenge against Yumemi.

Emiko plotted her own invasion. Actually, she didn't. Instead, she decided to do something else. She created powerful demons and sent them to kidnap Chiyuri Kitashirakawa, which turned to be successful. Emiko put Chiyuri in a water tank that slowly filled up. Yumemi needed to defeat Emiko within 2 hours otherwise Chiyuri would die in her watery grave. Yumemi armed herself with lots of gear and prepared for Gensokyo's greatest battle.

During the battle, they argued a lot, eventually putting Yumemi down. Emiko was harsh enough to say things like, "Rinnosuke's death was your fault! You're no scientist, you're no rival... in fact... you're just a cold-blooded crappy murderer!" Yumemi trembled that moment, almost fainting, until she noticed almost-dead Chiyuri. Yumemi broke the tank and Chiyuri was saved. Emiko was outnumbered and escaped.

One day, Yumemi encountered Emiko once again; however they had no weapons or anything scientific upon them that time. So Yumemi yelled at Emiko, "You're life is lowly and pointless. Your parents wanted you to be a peaceful child... but NOOO. You had to be a science freak! Rinnosuke was only nice, that's all... he thought your useless life was worth saving!" Emiko pulled out a poison, using her ability. "Go! Kill me!" but then Emiko said, "NO. Killing YOU won't bring Rinnosuke back. I'll just be as bad as you, being a murderer and not just a scientist. You're still murderer, while I'm a pure scientist. I'm not following the path of my rival. It's clearly obvious I'm much better. Just let it go, Yumemi."

Yumemi never met Emiko after that. Emiko took over Kourindou in honour of Rinnosuke. She renamed it 'Morichikamise', named after his surname and 'mise' meaning 'shop'. Emiko sells basically the same things, as well as a few 'scientific' products. Tokiko became her assistant. Also, Tokiko has became a lot stronger since Curiosities of Lotus Asia.

That is the story of Emiko Samidare. In personality, she's not exactly a freak about science. She seems relatively joyful however often rebellious and rude. I

Yasha Murasaki was created by the creator of Emiko Samidare.

One of the oldest gods

Born as an evil goddess, Yasha ignored her kin's evil ways and took her own path. She created her own world, Yakai, where she ruled ghostly Yaksha. With the power to manipulate a purple night; meaning to manipulate royalty and spirituality during night; she declared herself the queen of all the ghostly Yaksha. She created Konngara and used her as a tool to irritate Reimu for her own amusement.

Anything purple and 'good' literally annoys Yasha. She hates people being superior to her, and then during night, rids their spirituality and royalty using her ability. This made Yukari Yakumo Yasha's biggest threat. She is 'purple', as well as have the ability to control borders. That does mean Yukari can manipulate the borders of Yakai, making Yukari a huge threat. Not even her strongest Yaksha can defeat Yukari. Hatate Himekaidou also annoys Yasha, because her name means 'Princess', meaning she has some royalty (as well as her outfit being purple). However Hatate is not as irritating as Yukari.

Upon discovering Makai from an investigating Yaksha, Yasha instantly thought of Shinki as her biggest rival. Their kingdoms have similar names and they both create their residents. Also, they are both goddesses. Shinki takes it lightly, however Yasha is very violent against Shinki.

When Yasha heard of the so-called 'Friendly Yaksha', Yasha obliged and wanted to erase them all. "There is no space for diligent Yaksha in this world!" She did end up killing some Yaksha, however, one she could not defeat stood in her way; Tenajou Yoshikenmaru. She was extremely powerful, probably just as powerful as Yasha herself. Yasha told Tenajou to give up being a good girl and work for Yasha as apparently, "Tenajou had no chance".

However, Tenajou wasn't that stupid, however she did know she had no chance against Yasha by herself. So instead, she called Bishamonten to assist her. Bishamonten graciously punished Yasha and told her not to disturb his companions ever again.

Now understanding Bishamonten's true power, Yasha had no choice but to give up on the good Yaksha. Instead, she now trains everyday so one day she can defeat Yukari. Even though Yukari didn't actually do anything to disrupt her, Yasha hates Yukari with all her heart.

Yasha is truly a sinister person. She is also very, very purplish... HAHAHAHAHA!!!

Retrieved from "https://touhou.fandom.com/wiki/User:ChocolateLily?oldid=164881"
Community content is available under CC-BY-SA unless otherwise noted.