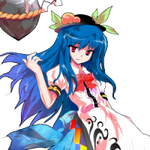 Well, I am an anime, games and Touhou fan. I usually spent my days doing nothing or losing at normal mode.

My favorite characters are Tenshi and Mokou, I also like Keine and Reisen very much (and many more).

I don't have much experience when it comes to editing pages, so I will try to learn as much as possible with other articles.

To Find Out The Reason of The Things

Ryuumi was a normal student at Keine's school. She had very good grades because of her ability (even if weak by that point in time) and her amazing luck, but she was not satisfied with that kind of life, she wanted to do more and to be remembered by all. She lives alone at the human village and her parents state is unclear (most likely they are already dead).

One day she was walking near the Youkai Mountain aimlessly, when she saw Hina Kagiyama spinning to the Moriya Shrine direction. Ryuumi decided to use her ability to find out why Hina was going there, and learned that Hina was going there to ask Sanae to seal a sword. Apparently Hina got tired of being avoided by others because of her fame as a font of bad luck and decided to store all her curses inside a sword.

However Sanae was out (because of the events from UFO), and Hina left the sword there with a little message. Ryuumi seeing this as a chance to change her life took the blade and left unnoticed. She didn't know that from the very moment she took it, her life would never see luck again.

When Ryuumi took the sword she started to think of Yuyuko as her enemy and defeating her as a way to become famous -this was caused due to Koishi's ability, since she heard about Yuyuko wanting to eat Okuu and thought this would bring Yuyuko some trouble-.

Ryuumi powers as a half-youkai awakened thanks to the curses, and she was able to use her ability with more precision and got a lot stronger, but never thought about using her power to find out why she thought of Yuyuko as an enemy.

Now she spends her days training (most of the times with Cirno and Rumia) and trying to think up plans to defeat Yuyuko, but she never actually got to see Yuyuko, since when she tries to do so a busy Youmu appears and defeat her with hypersonic speed because she has idiotic orders to follow.

Even though her dream was to be remembered by all, the sword cursed her such as she is almost always forgotten by anyone (98.8672% of the time). That is really troublesome on her daily life, she has to introduce herself over and over, but is very useful if she wants to trick or rob someone.

Manipulation of Water and Marine Animals

This character wasn't made by me, the credit goes to the "great someone else-sama!"

Mizusu is the eldest daughter of the Kawamiya clan and a kappa who studied the sea. She couldn't study properly though, so she just manipulate the actual animals itself so she would know them. After Seiga Kaku taught her about the technique of becoming a hermit, Mizusu now lies in the middle of the Youkai Mountain waterfall, resting.

Her name is 河宮 水子 Kawamiya Mizusu. The characters for Kawamiya translate to "River" and "Palace" therefore meaning "River Palace". The kanji for Mizusu mean "Water" and "Child" therefore meaning "Water Child". If we connect the two names together, it could mean "The River Palace's Water Child". Mizusu can also mean "Newborn Child" possibly referring to her awaiting resurrection.

She was the best Marine Biologist, but now she is currently in hermitude. After she awakes, it is unknown if she will continue that job or start something else.

Mizusu is somewhat lazy, but loves to jump and play around. She hated being bored, so when she is bored, she manipulates and does dangerous things with water. She is knowledgeable about the sea, only because she was the one who made it up in the first place.

Her ability, manipulation of water allows her to increase and decrease the amount of water in reservoirs. It also allows her to create random waves out of nowhere. Her ability to manipulate marine life allows her to edit their structure, colour, intelligence, name and other features.

Mizusu is the eldest daughter of a famous kappa clan, the Kawamiya. The Kawamiya wanted to become the ruler of the seas, however failed because of the power of the marine animals. Although, their eldest daughter, Mizusu lead them to success.

She was able to manipulate water, like the whole family could. However, no one could manipulate the actual animals themselves. Only Mizusu could do that. Mizusu manipulated the animals into becoming the Kawamiya's slaves, allowing them to take over the sea.

Mizusu annoyed marine biologists by constantly changing the marine animals' diet, appearance, name, population, etc. Scientists were eventually being called frauds. When they heard about Mizusu, who happened to know everything about marine life (because she manipulated them all) she was considered a true genius and the best marine biologist in the world.

However, Mizusu wasn't satisfied with having a powerful family that lead her to her own success and wanted to work on her own. She moved to the Youkai Mountain, where she met Aya Shameimaru, Momiji Inubashiri, Hatate Himekaidou and Nitori Kawashiro. She was great friends with Nitori and occassionally played games with Momiji. Sometimes Mizusu would give Aya absurd ideas for her next article. Mizusu assisted Hatate by causing her own fake incidents to help Hatate get more pictures.

One day, Mizusu was approached by a hermit, Seiga Kaku. Seiga told her everything about Taoism, wanting to spread it. Mizusu liked the idea of immortality and faked her death with a bamboo rod.

The story actually ends here, 700 years have passed and Mizusu is still sleeping. Her disappearance was noticed by all her friends and family, causing them to grieve. Where Mizusu actually lays now is deep in the Youkai Mountain waterfall, where no one dare pass.

Nitori Kawashiro: Nitori is probably Mizusu's best friend, both being kappa. Also, Nitori was the first person Mizusu met upon residing in the Youkai Mountain.

Aya Shameimaru: Mizusu often gave Aya crazy ideas for her next article. They also love to gossip and chat about trivial things.

Momiji Inubashiri: When no one is invading the Youkai Mountain, Mizusu would play some games with Momiji. When Mizusu is REALLY bored, she would help Momiji guard trespassers.

Hatate Himekaidou: Because Hatate can only take pictures of incidents that have already occured, Mizusu helps by secretly causing her own incidents, allowing Hatate to search them up.

Retrieved from "https://touhou.fandom.com/wiki/User:Alanomega?oldid=174601"
Community content is available under CC-BY-SA unless otherwise noted.