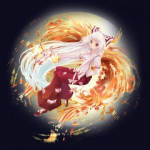 Hi there. I'm just another mad otaku who grazes in the fields of Gensokyo. I run an imaginary yakitori stand and people say I am best described as a tsundere. If it isn't obvious by now I am obsessed with Fujiwara no Mokou. I enjoy watching anime and playing crazy danmaku games involving dangerous, destructive, cute little girls inspired by Japanese folklore and holy religions.

Why do I like Mokou so much? Because she's powerful, she's a beautiful girl, and she easily has the saddest backstory. How would you like it if a princess humiliated your father and there is no way you can get revenge? You live by yourself, you constantly starve to death, only to reincarnate and suffer more pain. And the princess who humiliated your father kills you on a daily basis? That may imply that I detest Kaguya Houraisan, but that is not true, I do like Kaguya.

I'm still a newbie editor and I have a habit of falling inactive, so please bear with me.

My youtube can be found here, despite the fact that there's nothing to see there.

I DO NOT OWN ANY OF THE PICTURES IN THE SLIDESHOW!

Fujiwara no Mokou is my favorite Touhou character. But...

Indifference to anything and everything

The Bridge Overseeing the Ancient City

She was just an ordinary human living in the Human Village in Gensokyo. She always skipped school. In fact, Keine wasn't even aware she existed. Satoko often sat near her window dreaming about her future life. It wasn't until she met someone.

One day while shopping in the village, a handsome man randomly approached Satoko and proposed to her. Satoko to her surprise said yes and then started dating him. Though, a few weeks later, the man began to avoid Satoko.

An enraged Satoko began pursuing the man. She eventually found him, who was very bold, not allowing Satoko to take him down. However, her anger within overflew her body and she became a youkai, specifically a Hashihime. With her new youkai powers, she killed him almost immediately. After realising what she had done, Satoko ran away crying and never returned home.

Satoko felt too guilty to even step into the human world again and decided to live underground. On her way, she met a strange witch who said 'she could grant her happiness and joy'. As suspicious as witches are, Satoko felt that she needed this excitement. When this witch 'gave' Satoko happiness, what she did was possess her with an elf that is totally oblivious and indifferent to anything around her.

After traveling further in the bridge, she met a sad Parsee Mizuhashi, who was jealous of her unique kimono. Obviously Satoko didn't care with her new ability. Nowadays, she cheers up Parsee and guarding the bridge, not feeling jealous of anything or anyone. In fact, she forgot who the person she killed was.

As a result, Satoko became a happy-go-lucky Hashihime. She does whatever she wants to do without being prevented by other people. She's pretty much 'out-of-the-earth' and just in world of lalalalalalaness.

There is one bad thing to this. Parsee is jealous of her carefree nature. And why did the witch even give her this mysterious elf? No one knows but the witch herself. But of course, Satoko doesn't care.

Satoko is known to love flowers or anything nature-ish.

Unknown, under the age of 13 since reincarnation

Retrieved from "https://touhou.fandom.com/wiki/User:AlannahFujiwara?oldid=166466"
Community content is available under CC-BY-SA unless otherwise noted.