Undefined Fantastic Object plays like a fairly typical vertically-scrolling danmaku shooting game, in which the player's character is always facing towards the top of the screen, shooting at anything that moves, avoiding and weaving between enemy bullets, and confronting difficult bosses at the end of a stage.

A character's "shot" is the player's primary method of attacking enemies. The shot's attack area and behavior varies depending on the character and attack type the player has chosen.

Like previous Touhou games, there is a line most of the way up the screen called the point of collection. If you move your character at or above this line, all items on the screen will be drawn to your character. Unlike previous games, you don't need to have full power or focus to use the POC - it's always available.

Undefined Fantastic Object re-introduces bombs with distinctive visual styles that differ between characters, and even between shot types for the same character. A character's "bomb" is the player's limited-use method of getting out of difficult situations. A bomb's attack area, duration, and power varies depending on the character type and attack type the player has chosen, but it typically deals heavy damage to every enemy it touches, in addition to canceling out any bullets in the bomb's way. The player's character becomes invincible during and for a short time after the bomb's effect wears off. At the beginning of the game and any time your character revives, you will start off with 2 bombs. You can increase your bomb Stock by collecting bomb pieces (3 are needed for a bomb) or bomb items. Green UFOs drop a bomb piece when defeated and a full bomb when their score multiplier is full. You can carry up to a maximum of 8 bombs at a time. If you receive a bomb when you already have the maximum, that bomb will be lost. Unlike previous games, if the player loses a life the bomb counter only resets to default value of 2 if the player has less than 2 bombs—which means the player can always utilize all his accumulated bombs. Also, unlike every Windows game up to Subterranean Animism, bombing does not auto-collect every item on screen.

You start off the game with 3 lives. You can lose a life by getting "hit" by an enemy attack.

In Undefined Fantastic Object, the player's life stock is represented by stars. Red UFOs drop fractions of stars when defeated and when their score multiplier is full; if you collect four such fractions, you gain a life. You can carry up to a maximum of 8 extra lives at a time.

When you lose a life, you also lose 1.00 Power points (0.07 are scattered for you to collect). Also, all the bullets on the screen are cleared, and you become invulnerable for a short period of time.

There are 6 stages and an extra stage in the full version of the game:

Normal attacks are typically incrementally stronger versions of the boss character's basic attack. Spell Card attacks bedazzle the player with combinations of complex patterns that often involve the use of projectiles and obstacles crafted especially for use with that Spell Card. If the player manages to defeat a Spell Card attack without getting hit or using any bombs, a substantial score bonus is rewarded for the feat.

Each attack is accompanied by a timer. When time runs out, the boss will switch to their next attack pattern even if their health bar isn't empty. Waiting for a boss character's attack pattern to self-destruct may be enough to beat them, but mere survival won't earn the player any score bonuses.

"Speaking of a treasure ship, there's gotta be the seven gods of luck. And speaking of gods, then it's my turn."

Hold your mightiest needle straight ahead, and challenge the skies with straightforward feeling!

"I don't know if it's a treasure ship or what, but it's definitely the work of some youkai."

As always, follow your intuition and take down any youkai before you!

"It's a treasure ship, so obviously it's loaded with treasure. You can't lie to me!"

Challenge the skies with the light of this peerless ultimate magic!

"I saw it. There's no doubt that something is floating in the sky. Time to head to the sky!"

Overlook nothing, no matter how trivial, even behind you, with your mighty omni-directional magic!

"Lady Kanako is telling me to master youkai hunting like they do."

Brace for danger with the divine power of a serpent that devours evil!

"Lady Suwako seems to be sure that I'll find something good in the treasure ship."

Tackle UFOs with the divine power of a frog that will defeat enemies even after it dies!

"That weird snake-looking shape-shifting thing in the UFO got away!"

Hold your mightiest needle straight ahead, and uncover the UFO's true form!

Use your homing amulets to uncover the UFO's true form!

Uncover the UFO's true form with the light of this peerless ultimate magic!

Use your mighty omni-directional magic to uncover the UFO's true form!

Uncover the UFO's true form with the divine power of a serpent that devours evil!

Uncover the UFO's true form with the divine power of a frog that will defeat enemies even after it dies! 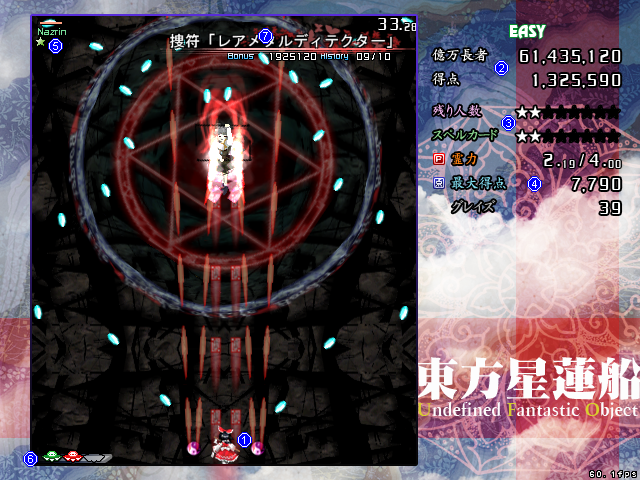 As its name implies, point items are the major source of points in the game. The higher up on the screen you collect them, the more points they are worth, up to a defined maximum. You can easily tell when you are collecting point items for their maximum value, since they show the value in yellow text. The auto-item-collect line is the same height as the height where point items reach their maximum value, so take advantage of this fact wherever you can for massive points. Unlike in the previous games, autocollected items don't lose their point worth if you happen to leave the autocollect area before items contact your hitbox.

The Point Items starting value depends on the chosen difficulty:

The value of Point Items is increased by 1,000 points for each small UFO collected while there is a summoned UFO on the screen, plus:

This is rounded down to the nearest 10. Enemy bullets canceled can come from summoning a UFO, a UFO explosion, finishing a boss attack, or using a bomb.

Power items increase your power gauge by 0.01. Power items collected at full power will give you 100 points.

Some enemies will have small green UFOs circling above them, they drop a small UFO after you destroy them, some stage mid-bosses will drop 2 small UFOs after you defeat their final attack. The small UFO will fly around the screen. They come in red, blue and green colours. There are two types, blinking and non-blinking. The blinking UFO will change colours every few seconds, however, keeping your character's sprite in close proximity to the UFO will prevent it from changing colors. The other type of UFO will stay a single colour. It should be noted that these non-blinking UFOs are not random, so their positions in the levels can be memorized to further advantages.

Collecting three UFO items causes a large UFO enemy to appear on the screen. Three of a specific colour of UFO will summon a big UFO of that colour, while collecting one of each will summon a flashing big UFO. If you have picked up two UFO items of the same colour and then pick up an item of a different colour, the first item in line will be replaced by the colour of the item you've picked up last. If you have two UFOs, a UFO of the color that will result in summoning a large UFO will be surrounded by a flashing pentagon so you will know what type to collect without having to look at the bottom-left corner. Each summoned UFO has a life bar and timer for how long you have to defeat it. At about two seconds left on the timer, the UFO will start ascending to leave the screen; it is important to defeat it before it leaves, otherwise all the items it has sucked in will be lost. If the UFO is on the screen at same time with a boss, it will fly away even if there is time left; however, in the case of mid-bosses, the UFO will stop flying away if the boss is defeated in time. In-game dialog will make summoned UFOs explode.

The maximum multipliers for the UFOs are:

Blue UFOs are potentially best for increasing score. When defeated, they drop a small UFO and give you points.

Green UFOs are for bomb parts. When its multiplier circle is full, a Green UFO drops a full bomb, and when defeated, it drops a small UFO and a bomb part.

When defeated, a UFO provides a score bonus based on how far the score multiplier is filled.

UFOs also clear parts of the screen when defeated, in a bomb-like fashion. The power of the explosion is based on how full the multiplier circle is.

Occasionally, a boss will attack using a Spell Card. You will know this is happening when the background changes and the Spell Card's name appears in the upper right corner of the screen. If the boss's health bar is depleted within the time limit and without getting hit or using a bomb, the Spell Card bonus will be added to your score.

The bonus starts at out at a value equal to:

with difficulty value being:

At the end of a stage, the player is awarded a clear bonus.

At the end of the game, the bonus is calculated as following.

Retrieved from "https://touhou.fandom.com/wiki/Undefined_Fantastic_Object/Gameplay?oldid=155661"
Community content is available under CC-BY-SA unless otherwise noted.