Is Remilia the only character to use spellcards that lack a prefix (i.e. "Love Sign")? That'd make a good Fun Fact. -7HS

She seems to be the first to do that, and the only one in EoSD that I noticed, but some of the last word cards in IN from various characters were like that too.

I had mentioned in a previous edit that it's not really known when the SDM, Remilia, and the others came to Gensokyo. Maybe it was 500 years ago, maybe it was 100, or any other amount of time, but it just isn't actually said anywhere in any official source I've seen. So I think it's assuming too much to say she came "centuries ago" instead of just saying it was "many years ago." I remember the wording of one source was such that it could have be taken to say they only arrived shortly before the the events of EoSD, but again this just isn't very clear from what I've seen. -Redpanda

The SDM couldn't have come to Gensokyo 500 years ago. The Hakurei Border was created in 1884, only a scant 118 years before the events in EoSD. Since PMiSS says the mansion moved from the outside world, it would have to have come to the Gensokyo area after the boundary went up. Otherwise, it would have said something more along the lines of "moved to the area that would become Gensokyo," or something like that. -Kagetsuwamono 5:46 AM EST Nov 18, 2011

Although she seems fearsome enough there is little application to her Manipulation of Fate. It seems to me that her ability is very cheap; shots that are sure to hit suddenly miss, strategies well-exercised in countless battles become ridden with serious mistakes, and near-precognition; by realizing the outcomes of action (hers and the opponents) she can weave a way around it, making her ability the Ultimate Slap In The Face to every danmaku pattern121.96.114.241 20:51, 8 August 2008 (UTC)Kar2n!

http://tvtropesmirror.wikia.com/wiki/Holding_Back_The_Phlebotinum
Control of fate is not control of the future, so what you said is not exactly true. Fate is the overall path of someone's life (it wouldn't so specific as to make bullets miss, and stuff like that), whereas the future is what is is going to happen later (in other words, the more specific stuff). I think you were slightly mixing up the two, although that is a very understandable mistake. --ArseneLupin3 14:47, 10 August 2008 (UTC)

In EoSD, IaMP, & SWRW, we can see something like necklace on Remilia's neck. It looks like Caduceus. I think it's not the original meaning, but maybe ZUN found the evilness in 2 snakes on it. Do all of you think it's OK to edit this on Description of Main Profile? --Masuo64 13:36, 6 December 2008 (UTC)

I suppose you're not right for Tasofro's Remilia, but it also happened to me that EoSD's Remilia looks wearing the cloth with holder of Caduceus. I thought it had better not be too complicated, then I combined the outfit of EoSD, IaMP & SWR. Do you have any idea to make the description better? I think it's better to add "(but this might be the holder of her cloth.)" after the present description. --Masuo64 08:16, 30 December 2008 (UTC)

The current version of Remilia's article says: According to Gensokyo's timeline, Remilia was born in the year 1503, making her, as well as her sister, one of very few characters whose birth dates are actually known. But the text below about her in each title is explaining that she was not exactly 500 years old, but approximately 500 years old. Then, what is the source of the information above? --Masuo64 16:54, 28 January 2009 (UTC)

I remember Flandre's Perfect Memento article, where it says: Her apparent age is about the same as Remilia Scarlet (who looks to be around 10, even though Remilia is 5 years older and they're both about 500 years old); then, as is known Flandre's birth (According to Gensokyo's timeline, Flandre was born in 1508), maybe it is was based on the Perfect Memento articles about Remilia and Flandre for explain Remilia's Birth? --Pipokary 19:51, 28 January 2009 (UTC)

Even then, it says about 500 years old, not exactly. I don't believe there is any source for her or Flandre's exact, confirmable date of birth. However, it depends on how you interpret the article. --ArseneLupin3 22:38, 28 January 2009 (UTC)

Hmm, thanx Pipokary & ArseneLupin3. Flandre's article in PMiSS says ４９５年程、悪魔の妹をしています。 "495nen hodo" means "to the extent of 495 years". It's used when we wanna say the lengh is rather short, but also when it is brief. Remilia's age is brief, so I think Flandre's age is brief, too. When the year is sure when Flandre was born, then the year isn't sure when Remilia was born because Remilia was about, or more than, 500 years old. When the 5 years is important between Remilia's & Flandre's age, the year isn't sure when Flandre was born, and it makes uncertain the year when Remilia was born. --Masuo64 06:20, 29 January 2009 (UTC)

The IN Section says that her favorite blood type is Type B...i'm sort of doubting it but do we know the blood type of any of the touhou characters? 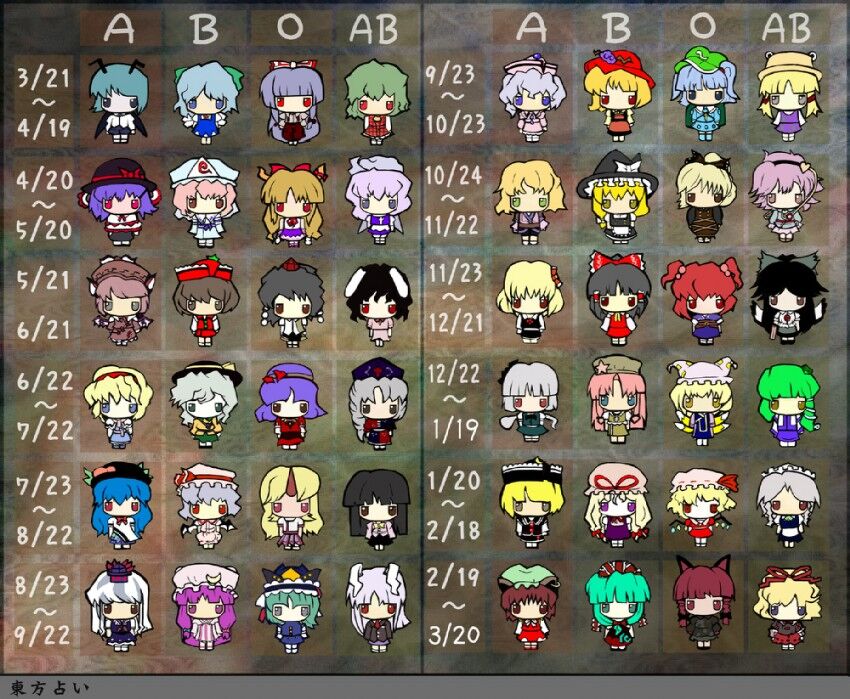 im just wondering,because,Patchouli is sometimes referred as anemic person right,then has a Blood Type of B.Do you get it? A punny touhou fan,theorist and ridiculist and etc. theloltmatecold 06:37, January 30, 2011 (UTC)

I see Remiria called "ojou-sama" all the time. Just in case anyone questions this, here are two quick simple searches for お嬢様 on ニコニコ動画 and pixiv:

It is a bit harder to find examples of her being called お姉様 by Flandre, since it is used only when quoting Flandre, but here is one example: http://www.nicovideo.jp/watch/sm12020246 - in the description of the video, Flandre calls Remiria お姉様.

Please use YouTube next time. Not everyone is registered to nicovideo. MaronaPossessed 20:18, September 12, 2010 (UTC)

The term "Imouto-sama" is almost practically exclusive to Flandre herself, so that was at least notable enough. Stuff like "Ojou-sama" and "Onee-sama" are very common in Japanese stuff that's not Touhou, so that falls into a gray area. Ojou-sama is a common term for any character with an aura of regality surrounding them, and onee-sama is just "older sister" with more of a respectful connotation. Just my thoughts. 68.84.74.52 21:34, September 12, 2010 (UTC)

That's right - if you just do any search for お嬢様 on Google, for example, you will get lots of stuff that is not related to Touhou, unlike 妹様 where you get nothing but Flandre. However, I will at least say that お嬢様 is used in the same capacity (i. e. as the standard nickname) of 妹様 when it comes to Touhou, and almost as frequently as 妹様, even if it is used in other ways outside of Touhou. Yes, there is also レミィ, but that is less commonly seen, and I think that it is a mere abbreviation of レミリア as opposed to an actual nickname. Here is a Google search for it, adding the word 東方 into the query: [1]. In any case, I do think that the fact that it is very frequently used to refer to Remiria does make this notable.--192.5.109.49 23:29, September 12, 2010 (UTC)
I also want to add, お姉様 as what Flandre calls her has a good basis in canon: [2]--192.5.109.49 23:59, September 12, 2010 (UTC)

Why are there so many fun fact "Nicknames" listed for Remilia? Some don't even have any rhyme or reason as to why they're popular. At the very least shouldn't these have sources?

for example, "There is a common joke that Sakuya calls her 「おぜうさま」 ("ozeu-sama") instead, which has made it a very common nickname for her. "

Just my guess, but probably "Ozeu-sama" is a mispronunciation of "Ojou-sama"... Even if it's not I'm thinking Ozeu-sama must have something to do with Ojou-sama lol (corrections are welcome). Deathsoul4 18:07, October 24, 2010 (UTC)

Precisely, some Japanese people sometimes spell words in pseudo-historical style as a kind of Japanese jokes. For example, "mairimasefu" (Let's go, 参りませふ) & "ikaga nasahimashita ka?" (What's the matter?, 如何がなさひましたか？), which aren't correct as historical style of spelling of "mairimaseu" (参りませう) & "ikaga nasaimashita ka?" (如何なさいましたか？). These are mainly used for joke of imitating the stereotype of lady in Meiji or Taishou era. Not for men, somehow. So "Ozeu-sama" is also pseudo-historical spelling of "Ojau-sama" (correct historical spelling of "Ojou-sama"), which seems to show the utterer of it, i.e. Sakuya, is a lady with a traditional value — to show she's a gentle lady. Why Sakuya must be a gentle lady is... maybe coz they might associate it with a Japanese phrase "変態という名の紳士" (gentleman whose name is pervert). --masuo64 Talk 06:32, October 25, 2010 (UTC)

Might it be better in the future to require an explanation as to the significance of a nickname? While nicknames are nice it seems a bit odd to use them if they can't be cited at all. Without an explanation i think most people would be confused unless it was obvious (like Remi being just a shortened version of Remilia) --Anon2057 23:07, October 28, 2010 (UTC)

Good idea. After all, THwiki's purpose is to deliver information about Touhou characters, not to just list their features without some explanation. (though it may be a good idea to do that by creating a separate name section... like that of Suika's page) Deathsoul4 03:57, October 29, 2010 (UTC)