Subterranean Animism plays like a fairly typical vertically-scrolling danmaku shooting game, in which the player's character is always facing towards the top of the screen, shooting at anything that moves, avoiding and weaving between enemy bullets, and confronting difficult bosses at the end of a stage.

A character's "shot" is the player's primary method of attacking enemies. The shot's attack area and behavior varies depending on the character type the player has chosen.

Like previous Touhou games, there is a line most of the way up the screen called the point of collection. Unlike the previous games though, it works slightly different, but the end result is the same. If you move your character at or above this line, your Communications Gauge is maxed which has the effect of drawing all items on the screen to your character. In the beginning of the first stage, the POC is clearly shown to the player. Like Mountain of Faith, you don't need to have full power or focus to use the POC - it's always available.

Like Mountain of Faith, there is no separate bomb counter. Instead, there's a relationship between your power gauge, bombs, and options. Options are the small "satellites" that stick around your character and shoot shots. The more power items you collect, the higher your power gauge rises. The power gauge takes on values from 0 to 4 (or 8 for Marisa/Alice), and decimal numbers in between. The number of options you have corresponds to the integer part of your power gauge - e.g., if you have a power level of 2.75, you have two options. When you go into focused fire mode, your options change position.

Your power level must be at 1.0 or higher to use bombs. Whenever you use a bomb, your power gauge decreases by 1.0 - thus, you lose an option.

You will start off the game with 3 lives. You can lose a life by getting "hit" by an enemy attack.

In Subterranean Animism, the player's life stock is represented by stars. Bosses drop fractions of stars when a spell or spell card is beaten without dying (bombing is fine, but timing it out will not give one); if you collect five such fractions, you gain a life.

There are 6 stages in the full version of the game:

Normal attacks are incrementally stronger versions of the boss character's basic attack. Spell Card attacks bedazzle the player with combinations of complex patterns that often involve the use of projectiles and obstacles crafted especially for use with that Spell Card. If the player manages to defeat a Spell Card attack without getting hit or using any bombs, a substantial score bonus is rewarded for the feat.

Each attack is accompanied by a timer. When time runs out, the boss will switch to their next attack pattern even if their health bar isn't empty. Waiting for a boss character's attack pattern to self-destruct may be enough to beat them, but mere survival won't earn the player any score bonuses. (Note: There are some bosses that are invulnerable. For those bosses, you WILL get a score bonus if you survive the countdown to zero.)

There are two characters to choose from, each of which have three styles of attack. The player decides which character to play and which attack type to use at the start of the game.

楽園の巫女 (The Shrine Maiden of Paradise)

Long-distance Spirit Attack: 「非常識の裏側」 (The Opposite of a Lack of Common Sense)

All points except for graze points are temporarily lost.

All enemy bullets that hit the area turn into homing bullets and attack enemies.

Collect all items on screen (release all buttons).

Fires in the same and opposite direction of your movement.
Option position is fixed while in focus movement.

Attacks everything around you for a fixed period of time.

You can move at very high speed (release the shot button).

Sacrifices a doll to fire a super high-power laser.

You can make up to 8 options.
You can stock up to 8 bombs.

You can change your options' attack formation (press shot and focus fire simultaneously).

Puts up a barrier for a fixed time.
If you get hit while the barrier is up, all bullets on screen will disappear.
If you don't get hit before the barrier disappears, some power will be restored.

If you use a bomb, your power will be 50% restored if you don't get hit. 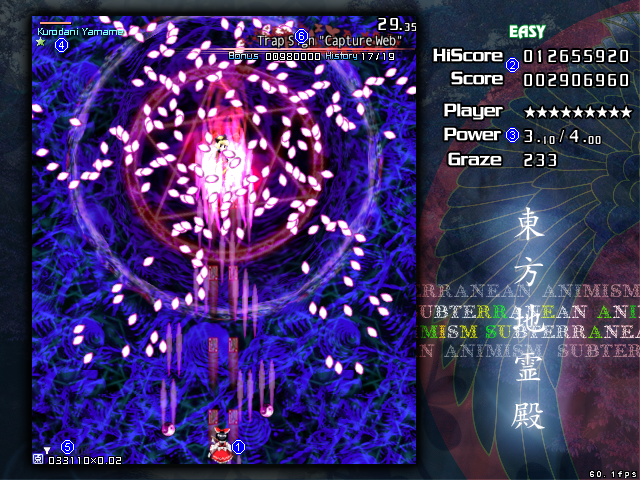 As its name implies, point items are the major source of points in the game. Unlike previous Touhou games they are worth more points not depending on how high you are on the screen, but depending on how high your Communications Gauge is. The higher the Communications Gauge, the more points they are worth, up to a defined maximum. You can easily tell when you are collecting point items for their maximum value, since they show the value in yellow text.

Overall point item value is calculated by a base value shown in the lower-left corner multiplied by a second value shown to the right of the first. The first one is limited and starts at a fixed value. It is increased by collecting special point items (100 for large, and 10 for small special point items), but is reset to its starting value upon death. If no losses have occured, the game stops the counter after a certain value has been reached.

The second value (shown to the right) acts as a multiplier for the first, starting from 0.00. When it is at 0.00, the point items are not worth 0 but a minimum of 10 points. The multiplier can be increased both temporary and permanently (see below) by grazing large amounts of bullets.

Special point items are the green star point items. (They look the same as Mountain of Faith's Faith Point items.) They slightly increase the value of point items.

The gauge in the lower-left corner reflects the strength of the communication channel between the player character and the youkai assisting them from above ground. It has a variable value of 0.00 minimum and 1.00 maximum which is added to the 2nd value (the multiplier) in the point item value, thus providing a range of point items' worth depending on how the player collects them.

It increases when you graze bullets; the faster you do it, the easier it is to max out the gauge. However, like the Faith gauge in Mountain of Faith, it decreases relatively fast over time if you let it, so you need to graze a lot of bullets in a small timeframe if you want to see a significant increase. At maximum value it has the effect of autocollecting items wherever your character is on the screen.

Once you hit the maximum value, it is relatively easy to keep it up by grazing no more than three bullets per second. Keep this in mind, because certain parts of the game (for instance, the first half of stage 5 and the second half of stage 2) have long stretches without conveniently graze-able bullet patterns aimed at the character, making it very hard to build up a new chain without having to go over the point of collection or undergoing other avoidable risks.

This counter, making a return from the Touhou games before Mountain of Faith, counts how many bullets have come dangerously close to your hitbox. Starting at 0, it affects the 2nd value (multiplier) in the point item value, increasing it by 0.01 per 100 points of graze. This accumulation is permanent, unlike with the base value.

The communication gauge effects still apply regardless of the accumulated graze points: it is always possible to increase the multiplier further by 1.00 by grazing bullets, and you don't receive free autocollection by grazing 10,000 bullets (thus reaching a minimum of 1.00).

Occasionally, a boss will attack using a Spell Card. You will know this is happening when the background changes and the Spell Card's name appears in the upper right corner of the screen. If the boss's healthbar is depleted within the time limit and without getting hit or using a bomb, the Spell Card bonus will be added to your score.

The bonus starts at out at a value equal to:

with difficulty value being:

Except for a few of Koishi Komeiji's Spell Cards (the survival cards and Subconscious "Rorschach in Danmaku"), the bonus decreases over time, starting 5 seconds after the spell card starts. The bonus decreases at a constant rate of:

A clear bonus is added to the score at the end of each stage. The bonus is based on the stage number and the lives remaining at the end of that stage regardless of the difficulty, it calculated as follows:

For both stage 6 and the extra stage the clear bonus is increases by:

For Marisa A you have to divide power by 2.

You also receive a silent bonus:

Community content is available under CC-BY-SA unless otherwise noted.