Mountain of Faith plays like a fairly typical vertically-scrolling danmaku shooting game, in which the player's character is always facing towards the top of the screen, shooting at anything that moves, avoiding and weaving between enemy bullets, and confronting difficult bosses at the end of a stage.

A character's "shot" is the player's primary method of attacking enemies. The shot's attack area and behavior varies depending on the character type the player has chosen.

Like previous Touhou games, there is a line most of the way up the screen called the point of collection. If you move your character at or above this line, all items on the screen will be drawn to your character. Unlike previous games, you don't need to have full power or focus to use the POC - it's always available.

Unlike previous Touhou games, there is no separate bomb counter. Instead, there's a relationship between your power gauge, bombs, and options. Options are the small "satellites" that stick around your character and shoot shots. The more power items you collect, the higher your power gauge rises. The power gauge takes on values from 0 to 5, and decimal numbers in between. The number of options you have corresponds to the integer part of your power gauge - e.g., if you have a power level of 2.75, you have two options. Although the maximum power level is 5, you can only have 4 options. When you go into focused fire mode, your options change position.

You start off the game with 3 lives. You can lose a life by getting "hit" by an enemy attack.

The player is awarded extra lives at 20, 40, 80 and 150 million points. A 1-Up item is dropped after defeating the midboss Nitori as well as the midboss Sanae, bringing the total number of extra lives earned to six.

There are 6 stages in the full version of the game:

Normal attacks are incrementally stronger versions of the boss character's basic attack. Spell Card attacks bedazzle the player with combinations of complex patterns that often involve the use of projectiles and obstacles crafted especially for use with that Spell Card. If the player manages to defeat a Spell Card attack without getting hit or using any bombs, a substantial score bonus is rewarded for the feat.

Each attack is accompanied by a timer. When time runs out, the boss will switch to their next attack pattern even if their health bar isn't empty. Waiting for a boss character's attack pattern to self-destruct may be enough to beat them, but mere survival won't earn the player any score bonuses. (Note: There are some bosses that are invulnerable. For those bosses, you WILL get a score bonus if you survive the countdown to zero.) 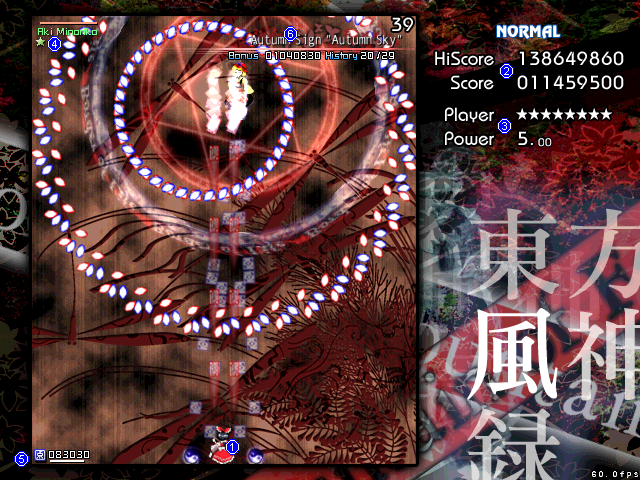 As its name implies, point items are the major source of points in the game. The higher up on the screen you collect them, the more points they are worth, up to a defined maximum. You can easily tell when you are collecting point items for their maximum value, since they show the value in yellow text. The auto-item-collect line is the same height as the height where point items reach their maximum value, so take advantage of this fact wherever you can for massive points. Point items that have yellow borders (only dropped by boss characters) give full points regardless of where they are collected.

The Faith Point system is new to Mountain of Faith. The number in the lower left corner of the screen is your Faith counter, which starts at 50,000. It cannot drop below 50,000, or go above 999,990. The green stars and orbs are Faith Point items. There is a bar underneath the Faith counter that drains over time, and defeating (and to a much lesser extent, shooting) enemies and collecting items will refill the bar. When the bar is completely empty, you lose Faith Points at a rate of 600 per second, or 10,800 per second if there are no enemies on the screen. The higher your Faith counter is, the higher the value of each individual point item and Spell Card Bonus.

The amount the large Faith Point item adds to the Belief counter varies depending on difficulty.

Small Faith Point items add 100 points. Finally, Faith Point stars items from bombing or finishing a boss attack phase will add 10 points to the Faith counter. Bullets cancelled by a bomb during a Spell Card will not generate these items.

When you lose a life, your Faith counter will go down by the following amount:

The formula used is always the same, regardless of difficulty level or character used.

When you use a bomb, regardless of character or difficulty, your Faith score decreases by 3,000. However, if you death bomb, your Faith score will not decrease. Death bombing can be identified with the dying sound once you use your bomb.

When you time out a spellcard or a boss's non-spellcard attack, regardless of any other factors, your Faith score decreases by 30,000. As of version 1.00a of the game, this occurs even on Aya and Suwako's survival spellcards.

Occasionally, a boss will attack using a Spell Card. You will know this is happening when the background changes and the Spell Card's name appears in the upper right corner of the screen. If the boss's healthbar is depleted within the time limit and without getting hit or using a bomb, the Spell Card bonus will be added to your score.

The bonus starts at out at a value equal to your Faith counter * (10 + (stage number * 3)) and decreases over time. Therefore, spellcards are initially worth 13x your Faith on stage 1, and increase to x28 your Faith on stage 6. Extra is counted as stage 7 and has a multiplier of x31.

Except for survival cards, the bonus starts to decrease 5 seconds after the start of the Spell Card. The bonus decreases at a rate of:

Unlike previous games in the series, there are no clear bonuses for stages 1-5. At the end of stage 6 or Extra, the player is awarded a sizable score bonus, which is calculated as follows according to the manual:

Power uses the first two digits of your power. So if you have 4.25 power, you'll use 42 for the value.

Retrieved from "https://touhou.fandom.com/wiki/Mountain_of_Faith/Gameplay?oldid=155287"
Community content is available under CC-BY-SA unless otherwise noted.