Windows, PlayStation 4, Nintendo Switch
Labyrinth of Touhou 2 (東方の迷宮 幻想郷と天貫の大樹, Touhou no Meikyuu: Gensokyo to Tennuki no Daiju), also known as Touhou Labyrinth 2, is a Touhou-centric dungeon crawler with similarities to titles such as Wizardry or Etrian Odyssey. It includes a large cast of Touhou-series characters, as well as a number of references and cameos of other role-playing, anime, and danmaku titles. The game was developed by 偽英国紳士団 (Nise Eikoku Shinshidan) and released for Windows in August 2013.

A new version of Labyrinth of Touhou 2 is being developed in collaboration with CUBETYPE and will be released for PlayStation 4 and Nintendo Switch in Summer of 2020. 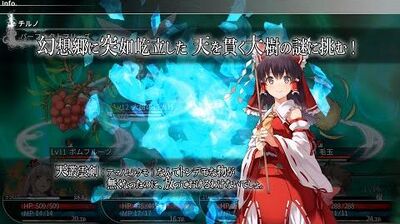