Aya reports on the "Lunar Capital Expo" being held at Eientei. The event seems to be popular among both the humans and youkai. Throughout the course of her report, Aya subtly hints that some (or possibly all) of the exhibits are fake. Aya then interviews the (self-proclaimed) rabbit from the moon, Reisen, and notes that the line for "moon rabbit" mochi is extremely long. She ends her report with a request that her readers visit the Expo.

In her follow-up, Aya interviews Kaguya on the apparent success of her Lunar Capital Expo, which Kaguya appears to be unsure about doing again. Kaguya explains that her exhibits were mainly antiques from around her house, but when questioned about their age and the authenticity of the stories behind them, won't give a straight answer, saying that people can believe what they want. Kaguya then reveals that her lineage is a long series of dilettantes (NEETs). 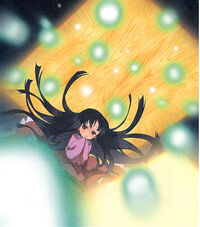 Retrieved from "https://touhou.fandom.com/wiki/Kaguya_Houraisan/Book_Synopsis?oldid=159367"
Community content is available under CC-BY-SA unless otherwise noted.