When Aya Shameimaru happened to notice a mysterious fire in the bamboo forest near Eientei she decided to investigate. Two girls, Fujiwara no Mokou and Kaguya Houraisan, were already present fighting the fire to put it out. Shortly after Aya began asking what had started the fire a noticeably nervous Mokou suggested it might have been a cigarette butt from kids while Kaguya suggested it was yakitori (that is made from chicken) which sent a frightened Aya (because she's a crow tengu) running with no further questions. Aya ended the article in wonderment over the true cause of the fire.

During her interview with Mokou, Aya comes to the conclusion that it must have been Mokou who did it. However, Mokou first repeats that a cigarette butt caused it and then later insists that there never was a fire and that Aya may just end up as yakitori if she keeps saying there was. 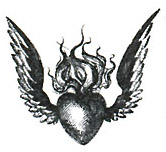 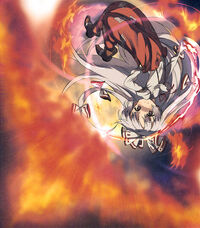 Retrieved from "https://touhou.fandom.com/wiki/Fujiwara_no_Mokou/Book_Synopsis?oldid=159372"
Community content is available under CC-BY-SA unless otherwise noted.