Flandre is the younger sister of Remilia and the "dirty little secret" of Scarlet Devil Mansion. Because of her unstable personality and incredible destructive power, her sister has had her ordered not to get out of the mansion for nearly 500 years. She knows little about the world outside and until the heroines arrived during the Extra Stage of Embodiment of Scarlet Devil, she has had no substantive contact with any humans other than Sakuya.

Aya reports on the strange explosion of a meteorite above Gensokyo. She learns that Flandre was the one who destroyed it, but becomes increasingly confused as Flandre explains she destroyed it by "going 'kyuu'" while holding the eye of the meteorite in her hand. Even more perplexing information is given by Flandre's older sister, Remilia. Apparently, it was planned that the meteorite was supposed to be aimed at the Scarlet Devil Mansion, and that Flandre would destroy it. Inexplicably, Aya ends the article with a report that spring has begun.

In her follow-up, Aya interviews Flandre about the explosion and Remilia's information. Flandre gives the same explanation for how she destroyed the meteorite, and, when questioned, says that her sister just acts like she knows what's happening. Remilia interrupts (for which Aya is thankful), and confirms that what Flandre said was true, insinuating that Aya just can't understand, while giving strange information about the meteorite's source. 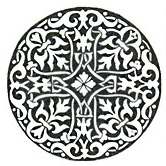 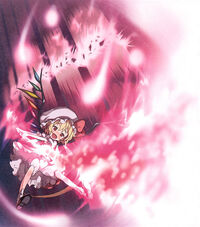 Retrieved from "https://touhou.fandom.com/wiki/Flandre_Scarlet?oldid=125215"
Community content is available under CC-BY-SA unless otherwise noted.