Hina is the leader of the Nagashi-bina doll army whose job is to scare off lost Humans who get too near to the Youkai Mountain as well as gathering their misfortune. When Hina sees the heroine nearing Youkai Mountain during Mountain of Faith she attempts to scare her off. This isn't because Hina is cruel, she's actually trying to help the heroine who she thinks could be harmed on such a dangerous mountain. However, regardless of her good intentions and claims of being a friend to humans, the heroine isn't too happy with Hina getting in the way and must defeat her.

The Grimoire of Marisa[] 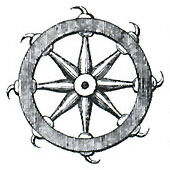