Kisume is a rather shy youkai who usually spends her time in buckets. As a midboss with no dialogue and a rather sparse official profile, little is known about her, but she seems rather childish. She is often seen in dark places such as caves or wells. 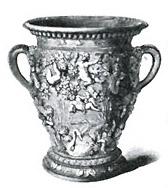