She is a doll specialist, but dolls are more like a hobby in comparison to her full power. Alice is always seen with a locked grimoire in her hands, which is thought to be the same "Grimoire of Alice" that she fought the protagonist with as the Mystic Square Extra Boss.

Because Alice, unlike Marisa, is much more interested in strategy and hates having to win a fight from sheer overwhelming power, she always holds back even if it means losing.

In Touhou Hisoutensoku she creates a giant doll and tests it in battle against Cirno at the end of the latter's Story Mode.

Alice has been making straw effigies and nailing them to trees in the forest behind the shrine, a ritual usually done in order to curse someone (similar to the use of a voodoo doll.) However, she claims that she is only doing it to further her research in creating an independent doll.

During the following interview, Alice complains that since Aya spied on her nailing the effigies, the effectiveness of the ritual was reduced. She talks about how although such effigies don't look like anyone in particular, they symbolically represent someone, then evades the question of who that someone might be. Finally, she mentions that she thinks she saw an independently moving doll "a long time ago", and has been trying to create one ever since.

The Grimoire of Marisa[] 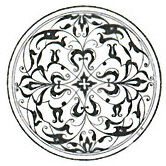 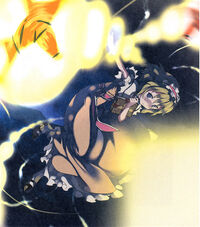